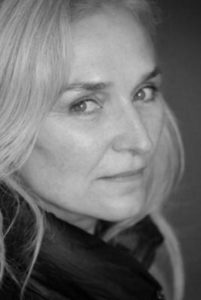 Olwen Fouéré is an actor, director and creative artist who works internationally in English and in French.

Her acclaimed adaptation and performance of the voice of the river in James Joyce’s Finnegans Wake – riverrun – has been touring internationally since 2013, receiving many awards including the Edinburgh Herald Archangel Award 2014, The Stage Award and the Irish Times Special Tribute Award 2013.

Recent stage work includes an adaptation of Salomé written and directed by Yael Farber, which will be remounted at the National Theatre, London in May 2017; Lessness by Samuel Beckett at the Barbican International Beckett Festival in June 2015 and Galway International Arts Festival 2015; and her production of Danse, Morob by Laurent Gaudé which premiered at Project Arts Centre, Dublin, in January 2017.

Recent screen credits include the multi award-winning The Survivalist by Stephen Fingleton, for which Fouéré received a 2016 IFTA nomination, and The Wake by Oonagh Kearney.

She is currently collaborating with artist Jesse Presley Jones, representing Ireland at the Venice Biennale 2017.

She received an Honorary Doctorate (Doctor of Philosophy – Honoris Causa) from Dublin City University in April 2016 for her contribution to the arts and culture in Ireland.