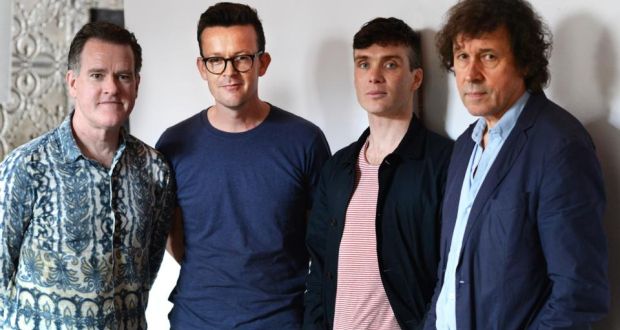 Enda Walsh’s intense new play brings together an all-star cast of Cillian Murphy, Stephen Rea and Mikel Murfi. Are they looking forward to being put under ‘tremendous strain’ by Walsh?

A new play by Enda Walsh is bound to cause a stir on the Irish arts scene. The play, which stars Stephen Rea, Cillian Murphy and Mikel Murfi, is an exciting prospect. And a new play by Walsh whose run at this summer’s Galway International Arts Festival sold out before the festival programme was even launched, well, that’s a bit of a phenomenon.

So it is intriguing, to say the least, to be sitting at a table with Walsh and the cast of Ballyturk, who have taken a break after two weeks of rehearsal in London to do some publicity in Dublin.

It’s quite a quartet. The Sligo-born actor Mikel Murfi is touring Ireland with the one-man show he wrote himself,The Man in the Woman’s Shoes. Cillian Murphy’s movie career has taken him into serious A-list territory: Inception,Batman Begins, 28 Days Later and The Wind that Shakes the Barley as well as a fistful of award-winning independent roles. Walsh, who won a Tony Award for his book for the musical Once, is making major waves in the international theatrical world.

Then there’s Stephen Rea, who you might have heard of. The founder member, with Brian Friel, of Field Day has been collaborating with the American playwright and director Sam Shepard on a regular basis. He worked with another Sam – Beckett – on Endgame. As for his movie credentials, how about The Crying Game, The Butcher Boy,The Company of Wolves, The Devil and the Deep Blue Sea,The End of the Affair – and that’s just the movies beginning with “The”.

Two years ago, Cillian Murphy’s performance in Walsh’s one-man play Misterman was a sensation at Galway Arts Festival. It won him an Irish Times award for best actor, as well as a Drama Desk Award when the play transferred to St Ann’s Warehouse in New York.

“It was one of the most fulfilling and satisfying times I’ve ever had,” says Murphy, who has just finished shooting the second series of the BBC drama Peaky Blinders – and has the haircut to prove it. “I’ve always loved theatre and I’ll always come back to it.”

Misterman required Murphy to portray, not just the obsessive, unhinged Thomas Magill, but all the other characters he encountered – from a flirty waitress to a foul-mouthed garage man – as he went about his work of trying to convert the townspeople of Inishfree to God.

Working on Ballyturk as part of a trio must be very different? “It’s totally different. Every show is always different,” he says. “It’s nice to be sharing a stage with two brilliant actors. That’s always a nice thing.”

With its inch-perfect timing and delivery, the comment offers an intriguing hint as to how rehearsals for Ballyturk might be shaping up. What can Rea tell us about the character he plays in the piece?

“Well, my character is different to the others,” he begins. “I mean, these two guys are fantastic. There’s an incredible explosion occurring all the time. When I read the play first, I couldn’t see how a third person could enter, but he does, and it made total sense.”

Another first go for Rea

Not having worked with Walsh before, was it a role that attracted Rea immediately? “It took a while to say yes,” he says, “only because I was doing another play and my head was opening – you know – as it does when you’re doing plays. So it took me a while.

“I’ve been lucky enough to get first go at some plays, likeTranslations. Friel sent me the first act of that, and you just go, ‘Wow’. Then Sebastian Barry sent me Ballycumber, Frank McGuinness, Someone Who’ll Watch Over Me. You just know. There’s a particular tone that a play has, that’s itself and nothing else; and you know that unless the writer has a nervous breakdown by page five, this is going to be great. And I felt that with this play.

“Do you know, I had to do a reading the other day. It was talking about Patrick Pearse and on the page it said ‘St Edna’s’.”

Instead of St Enda’s, the school where Pearse taught?

On the other side of the table, Walsh, Murphy and Murfi are rolling around with laughter; clearly, for today at least, Rea has taken the role of joker in the pack. Although you would never guess it to look at him: his face is the picture of gloom as he continues, lugubriously, with his story. “I said, ‘F***, you’ve landed me in it, anyway.’ ”

In an effort to restore some sort of order, I lob a question at Murfi about how Ballyturk connects up with his work on other Walsh plays, since he directed Penelope and The Walworth Farce and was movement director on Misterman.

“Initially I was asked would I fight- direct on Misterman,” he says, “which I thought was hilarious, because how do you fight-direct on a one-man show? But there were places where Cillian had encounters with dogs or was beaten up, so we had to imagine the other half of those.

“To be fair, I did very little because Cillian was so in the groove. There were certain things that I troubleshot in terms of health and safety – just to make sure that the items that he was going to crash into, handle, touch, jump on and all that sort of stuff, would be okay.

“Enda’s plays tend to have sequences which are precision-written in terms of the actions and where they go. With The Walworth Farce, it was really full-on. I couldn’t understand how Enda had written it in his head; I thought he must have had a little model set and moved the people around to track where they were at any particular time. It was extremely complex.

“There are sequences in Ballyturk that have the same kind of energy requirement. It’s pretty intense in terms of what’s required of you physically, but you realise, actually, that there’s all this physical activity for myself and Cillian, and then there’s this mental, psychological journey that gets thrown in there, which makes it even more of a challenge.”

A journey towards death, according to the few clues that Walsh has given to the content of the play. It was inspired, he says, by a pertinent question from his six-year- old daughter. “So,” she said. “People die?”

What is it in Cillian Murphy’s psyche that brings him to Galway in the summertime to pursue first the madness that was Misterman and now the darkness that is – or may be –Ballyturk?

“I don’t necessarily seek out gloomy themes or topics,” he says. “I just really like Enda’s plays. I try to follow good writing, wherever it takes me. I think as actors we’re all amateur psychologists. We love observing people. And what Enda does is put these characters under tremendous strain.

The Ballyturk four nod in agreement and the rest is silence. They’re not giving anything else away, but I’d be willing to bet that Ballyturk will be very interesting indeed.

Ballyturk is a co-production between Landmark Productions and Galway International Arts Festival. All shows for Galway have sold out, but the play will tour to the Olympia Theatre, Dublin, August 7-23 and Cork Opera House August 26-30, before moving to the National Theatre, London, in September

Written by Arminta Wallace in The Irish Times 01.07.14