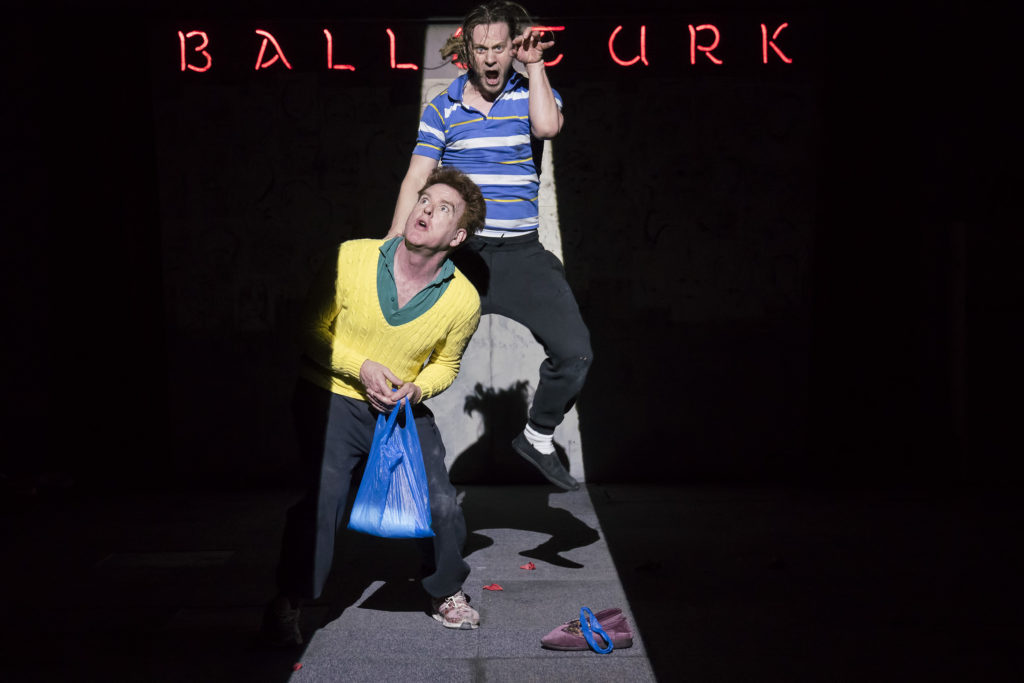 ★★★★
Shades of Vladimir and Estragon, by way of Morcambe and Wise, brilliantly colour this revived and recast take on Enda Walsh tale of creation and confinement.

It’s difficult enough to get out of any small town, as suffocated young artists from Dylan Thomas to Patrick Kavanagh have always known, but the location of Enda Walsh’s 2014 play offers less possibility of escape. Ballyturk, in fact, seems to be a place constructed daily from the minds of two men, trapped together in a vast room without doors or windows, who perform the frantic and frazzled stories of a place they imagine beyond its walls.

As the second of Walsh’s companion pieces about creation and confinement is staged at the Abbey, in Landmark and Galway International Arts Festival’s revived and recast co-production, imprisonment doesn’t prevent variation.

Only Mikel Murfi returns from the original production, playing the older of the nameless pair, joined by Tadgh Murphy, a physical livewire, full of questions, dogged by dim memories and prone to fits. It’s hard not to see them as descendants of Beckett’s Vladimir and Estragon, by way of Morcambe and Wise, passing the time with accelerated routines, quick changes and choreographed breakfast rituals.

Occasionally, though, evidence of an outside world intrudes: chatty voices burble through a wall, a buzzing fly makes an entrance (Murphy’s character is agog, he has never seen one) and a potted flower mysteriously appears. Such signs of life are entrancing and perplexing.

Yet the play is closer to a meditation on death; that undiscovered country. “I thought we knew everything there was to know,” says Murphy, stunned by the fly, and soon the boundaries of this tiny world are torn apart completely (in Jamie Vartan’s set, literally) with the arrival of a stranger, played by Olwen Fouéré, who steps carefully down a collapsed wall in her pencil skirt and heels, crouching low, like a preying animal.

Fouéré’s is a fascinating performance (“I’m a collector,” she tells them. “That’s why I’m here.”) with barely a ghost of Stephen Rea’s interpretation of the role. Instead, she refines the character with Walsh (who again directs) to become faintly apologetic while no less commanding. The manic energy of Ballyturk’s routine, excellently delivered by Murfi and Murphy’s double act, stills with her arrival and a proposal: It’s time for one of them to leave.

What they would be departing in Ballyturk is a world of cartoonish exaggeration, tumbling with madcap fictions, avalanches of props and shrieking impersonations – in short, an Enda Walsh play. Like the visitor to The Walworth Farce, Fouéré’s character suggests an alternative to this endless mad performance that may be real life, but her solemn sermons convey that reality without flavour, a quotidian existence rendered from “purpose and mistake”. Life as we know it.

“And what will I do?” asks one friend when the other offers to die. “You’ll live,” comes the reply. Given a choice between the strange energy that keeps them in this confined world, and the beige unknowns of life beyond its limits, its hard to know which is the better option.