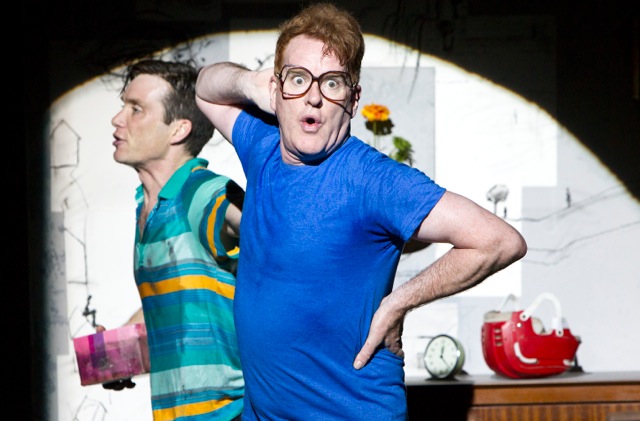 As Ballyturk is readied for Dublin and Cork, Enda Walsh is already thinking about his next play, writes Alan O’Riordan.

SINCE opening at the Galway Arts Festival last month, Enda Walsh’s new play, Ballyturk, has been greeted with the customary laudatory reviews the Dublin-born playwright gets. A gloomy existential message leavened by Cillian Murphy’s comic virtuosity, Mikel Murfi’s physical language and Stephen Rea’s urbanity. What more could an audience ask for, or a playwright for that matter?

“Yeah, I knew when I sat down to write it I was writing for them,” says Walsh of Murfi and Murphy. “Michael has great instinct, great fire, a great gut. And Cillian’s exactly the same. They collaborate so freely and so easily. To me they are all comedians. And Stephen Rea as well, they are all very instinctual actors. I had Stephen’s voice my head when I was writing it, so I thought, if we’re lucky enough to get him, that will be 90% done. He’s incredible, his stillness, his outlook — it’s very different to the other two.”

Ballyturk is another of Walsh’s places of dislocation. A fictionalised noplace, it evokes Beckett’s Endgame: two characters confined in a room, constructing rituals to give the illusion of meaning, playing scenes with a cast of characters, passing the time that would have passed anyway — a theatrical demonstration of the brevity of existence.

We all have our moments of reflection on the proximity of our ultimate end, but Ballyturk comes from a very specific prompt, says Walsh. “I was having a conversation with my daughter, who was six at the time, and she said, ‘So people die?’ And I said, yeah, they do. ‘All of them?’ Yeah. We all die, I said, you don’t think about that when you’re living. You have a life, you fall in love, you get a house and a job and you busy yourself. She said, ‘Is it always in the back of your mind?’ And I said, no, no, it’s really far back there. As you get older maybe, but you can live with that.

“So, we had this very formative experience for both of us, and I was looking at my six-year-old daughter thinking, she’s processing this. And I thought, when does innocence end? Does it end at that point? That knowing that we are here only for a certain amount of time? Seeing that slow dawning of understanding, I thought, wow, what happens when you take that moment and dramatise it?”

Ballyturk takes that conversation with a child to its heart in the two childish characters who are ultimately confronted with an end of innocence. But Walsh has always specialised in arrested development. One only has to think of the babble of Pig and Runt in Disco Pigs. So, the play is familiar territory for Walsh, yet, using the word “familiar” about his work seems inadequate. Yes, there is much for us to recognise in Walsh’s dramatic worlds, but there is always a heightened, intense strangeness to them too. He gives us isolated characters desperately seeking meaning in their lives while stuck on a hamster wheel of memories.

The New Electric Ballroom, from 2008, was set in a remote fishing village. But its focus was on an interior landscape, with three cut-off souls, sisters Breda and Clara, in their 60s, and Ada, in her 40s, reliving endlessly the frustrated amorous ambitions which took place at the eponymous dancehall.

Before that, in The Walworth Farce in 2006, a family is shackled to the endless retelling of its own private myths, repeatedly playing out their father’s emigration story.

Does any of this thematic material stem from Walsh’s own emigration? On the face of it, one would think not. Walsh moved to London a decade ago with his wife, Jo Ellison, formerly of the Irish Examiner and now fashion editor at the Financial Times. And he looks like an advertisement for London life — lithe, trim, always on the cusp of laughter, Walsh brims with vitality. He is deftly turned out, in a neat dark T-shirt and narrow jeans, with an expensive-looking haircut and tortoiseshell glasses.

Yet there is something in it, he says. “When I was in Cork I thought, you know, I could just sit back here. And that’s not a good place for a writer or any sort of artist to be. You can still make great work wherever you are, but for me it was important that I isolated myself. You’re trying to find something that’s unique to you and that isolation gets you looking at yourself.

“I was in this city of such size, and I started writing these plays about man and his environment, how that affects you. I think that’s what London has done, it’s put a lot of pressure on character and form. I love the wildness and energy of London, and feeling that small puts a lot of pressure on the page. You feel, right, I’m in this massive city, so I need to try and pour something of myself out onto the page.”

Walsh’s creative enterprise has become a pursuit of the fundamentals of theatre and life. His plays are about both, but easy resolutions and story arcs aren’t his thing. “People think playwriting is about story, about putting characters into certain situations, but it’s not. It’s never about that. Your first instinct is what is the atmosphere of it? What are you trying to make people feel? That’s enough to go on. Then the characters begin to form. You sense that there is something there to write, and you start writing. You’re writing about that feeling.”

Walsh goes on to relate a story about the playwright Sarah Kane. Once, when asked if she was writing a play, she replied, “Yeah, yeah. I haven’t written it, but I can hum it.” Right now, he says, the tune of another play is in his head. “It just sometimes comes in and out of my head. My mother has Alzheimer’s so I wonder what her notion of geography is. Is there a way of constructing a play about someone’s world shifting, someone trying to make sense and navigate that into some kind of clarity. It’s a very abstract notion but that’s enough to go on. It’s something about the nature of people trying to understand where they are.”