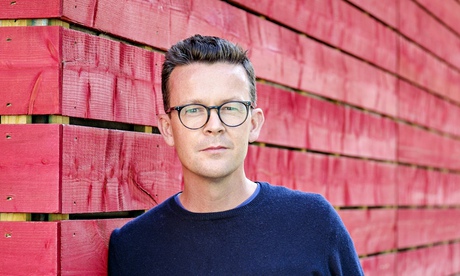 The Irish playwright-director, Enda Walsh, would seem to have the world at his feet. His latest play, Ballyturk, was acclaimed in Galway this summer and opened at the Lyttelton on Tuesday with a star cast comprising Cillian Murphy, Mikel Murfi and Stephen Rea. Walsh’s book for the long-running musical Once won him a Tony award on Broadway. And, at the age of 47, Walsh lives a comfortable life in Kilburn with his independently successful wife, who is fashion editor of the Financial Times, and their young daughter.

Yet Walsh, in plays like Bedbound, The Walworth Farce, Misterman and now Ballyturk, persistently deals with solitary, hermetic characters who live in terror of the outside world. How does one explain the apparent contradiction between the man and the work?

“I was talking about this to Cillian in rehearsal the other day,” says Walsh in the course of a telephone interview. “I told him about a ground-zero moment I had some years ago. Just after my play Disco Pigs opened in 1996 and was being picked up everywhere, I was walking over Patrick’s bridge in Cork and I stopped dead still and felt absolutely terrified that I was alive and had to keep on living.

“The moment lasted maybe five seconds and I kept on walking. But it’s a playwright’s job to explore that feeling that, however many good days you may have, you are still ultimately alone and walking around in your own private universe,” he says.

Beckett, whose influence on Walsh is palpable, and Pinter would recognise that idea that beneath the surface of everyday life lays a gaping black hole: indeed Pinter from his youth frequently quoted a phrase of Cardinal Newman that creation is a vast “aboriginal calamity”. But Walsh is very much his own man and creates his own unique world on stage: in Ballyturk the nameless characters may occupy a womb-like space but they pass their days fantasising about life in the imagined Irish town that gives the play its title and engaging in speeded-up comic rituals that remind one of Buster Keaton.

Walsh admits that the play sprang from two specific moments: an image and a conversation. The former came during a technical rehearsal for Misterman in New York: Cillian Murphy, totally wrapped up in his role, was absorbed in talking to the sole character’s mother on a tape-recorder while the production manager, Eamonn Fox, sat a few feet away raptly fixing a table leg. Out of that came the idea that two people can be intimately bound together yet totally solitary.

The other trigger was a moment when Walsh’s daughter, then aged six, started asking him about death and whether one thought about it all the time. “I explained to her,” says Walsh, “that, if you’re lucky, you fall in love and have a family, a job and go on holiday even if death is an ever-present reality. That idea certainly found its way into Ballyturk.”

The persistent paradox of Walsh is that his plays are haunted by death and solitude yet his characters are filled with a phenomenal verbal and physical energy. But I suspect the ultimate source of this dichotomy lies in Walsh’s childhood.

“I’m still stuck in my head,” he says, “as a 13-year-old boy in the Ireland of the early 1980s. I grew up in Dublin in a suburban, middle-class family. There were six children and family dinners were always raucous, noisy affairs. I also bonded with my dad over comics like The Three Stooges, whose films were always showing on RTÉ.

“But my dad ran a furniture business, which he lost at the time of the Great Recession before dying of a brain haemorrhage,” he says.

“It was terrible but I’d still say that growing up around a businessman is a great training for a playwright. I look at my dad’s life and see that he constantly had to slip in and out of character and that, beneath the surface bonhomie, there was always a sub-text. I feel that for years my plays were based on my dad’s furniture shop.

“Even when I first walked on to the set of Ballyturk, I recognised images from my own childhood.”

Given his father’s enforced role-playing and the fact that his mother was an actor, it would seem Walsh was destined to be a playwright. But his first impulse was either to form a band or be a film-maker. Studying film, however, in the Ireland of the late 1980s was, Walsh once said, “like studying dentistry in a country with no teeth”. Instead he settled in Cork, where he worked with a new theatre company called Corcadora for which he acted, directed and eventually started writing plays. Out of this came his first big hit, Disco Pigs, a tragedy-laced portrait of a pair of misfit teenagers.

For all the verbal firepower of that and the subsequent plays, it would be misleading to see Walsh as part of a linguistically exuberant, Irish storytelling tradition. What is striking about plays like The New Electric Ballroom (2005), The Walworth Farce (2006) or Penelope (2010) is that Walsh’s characters seem entrapped by their memories or myth-making propensities; at the same time, they display a mesmerising kinetic energy.

“I suspect,” says Walsh’s friend and long-time colleague Mikel Murfi, “that playwriting is for Enda a way of exercising, or possibly exorcising, his private demons. It’s a fact that, when he first came to London, he suffered a form of compulsive-obsessive disorder. But that may help to explain the extraordinary physicality you find in all his work.”

For Walsh himself the motive for the astonishing demands he makes on his actors in Ballyturk is that he knew he was writing for two highly expressive performers: Murfi tells me that the moment in Ballyturk where he has to embody the imagined town’s population in the space of 30 seconds stems from a promise Walsh once made that he would write him a piece where he had to play 50 different characters. For Walsh, in fact, theatre is all about the immediacy of the living moment.

“Beckett’s not a conscious influence,” claims Walsh, “but he taught us all two great things. One is that he helped free drama from any obligation to be sociological: the other is that he showed us the power of real time. I’m hugely attracted to that and don’t really understand theatre that deals with action over several days. And, although I may have started out being preoccupied by language, I’m now obsessed by form.

“I remember once talking to Sarah Kane and asking her how she was getting on with her new play. She said ‘I haven’t started writing it yet but I can hum it.’ That’s exactly it. You have to find the internal rhythm of a play in order to make it work.”

That obsession with form and the visceral impact of theatre is partly what drives Walsh on. He’s worked in film, writing the screenplay for a movie of Disco Pigs and co-scripting the prize-winning Hunger (2008) – directed bySteve McQueen and dealing with Bobby Sands, the IRA man who starved himself to death in protest over British rule. But you feel that film is a diversion from Walsh’s real task.

It’s significant that Anne Clarke, whose company Landmark Productions co-produced Ballyturk with the Galway International Arts Festival, and Murfi both use exactly the same phrase to describe Walsh: “a pure theatre animal”. And Clarke, who describes Walsh as “a gift to Irish theatre”, is eagerly looking forward to working with him next year on a new chamber opera he has written, Gas, composed by Donnacha Dennehy.

When I ask Murfi how he would describe Walsh to someone who had never met him, he says: “Gentle, mannerly, funny, quiet – although, if pressed, he might sing a Neil Diamond song for you at a party.”

Yet Walsh’s physically explosive characters inhabit a world of enclosed solitude. Murfi comes closest to explaining the contradiction that is Enda Walsh by saying “he gets to divest himself of his anxieties in his work and shows how the darkness within Ireland exists alongside our bonkers attitude to the exhilaration of life.”

Career Started writing plays in Cork in 1993 and has since authored 17 stage plays, two radio plays, three screenplays, the book for a musical and an opera libretto.

High point Winning a Tony award on Broadway for his book for the musical Once, which won in eight categories.

Low point Two years of panic attacks when he first moved to London involving drinking a glass of water at the same time every day or visiting the same cafe for the same lunch.

What he says “You don’t have to understand everything. You’ll get it in the heart.”

What they say “He has an instinctive, visceral understanding of how theatre works”: Garry Hynes, artistic director of Druid Theatre Company.

Written by Michael Billington in The Guardian 18.09.14