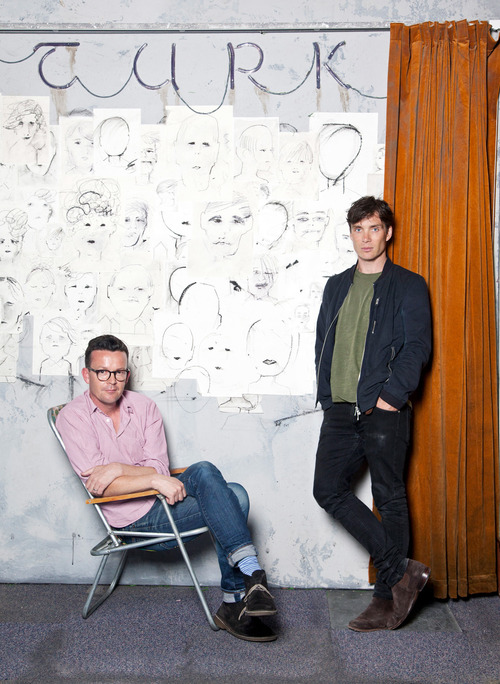 Following his stage debut in Enda Walsh’s play ‘Disco Pigs’, about the dysfunctional relationship between two Cork teenagers, in 1996, Murphy (right in picture) found fame with the post-apocalyptic zombie film ’28 Days Later’ in 2002. He has since appeared in more than 30 films, including ‘Batman Begins’ and ‘Inception’. He lives in north London with his wife and two children

I was 18, had just left school, and had a vague notion that I wanted to be an actor. Enda was working with [Cork theatre group] Corcadorca at the time. I adored its shows – Clockwork Orange blew my top off. So I started hanging around them and blagged an audition.

Enda was unbelievably warm to me as a young nobody. He told me about this play Disco Pigs that he’d written and he asked me to come and read some lines. We met up in a café in Cork city. He has a Peter Pan-ish quality and back then, this magnificent hair; he looked like a TV presenter. I didn’t understand what Disco Pigs was about, and I had no experience of acting whatsoever but I could sense that it was good – and that we shared the same sense of humour.

We toured that play for 18 months; a small group of us travelling around, messing about and having fun. Me and Enda had one game where we would speak in funny voices, taking the consonants out of every word, and it felt like our exclusive little club; I never noticed the age gap. By the end, we’d become friends for life. That period changed my life more than any other, and it’s influenced all my choices since; Enda put me on the path to acting and gifted me with an early career.

He’s into human behaviour – the struggle of waking up in the morning, putting one foot in front of another and getting through the day – and his stories are all a way of examining the human condition. Enda is a sucker for a stupid gag and so am I; we both like slapstick. But I’m not known for my comedy in films, I don’t get sent those scripts, and Enda knows it. So I get that freeing feeling when we work together.

When I saw his script for Misterman in 2011, I’d not done theatre for six years. But I thought, “That’s it!” I’ll always remember the first preview in Galway. I’d finished this crazy, two-and-a-half hour piece, standing on stage with a set of angel wings on my arms, and there was silence from the audience, for 45 seconds. I thought, “Well that was a waste of five weeks.” Then the first person to clap was Enda and the room erupted into applause.

Though we’re very alike, he’s better at being on his own, I think, a skill that I’ve never acquired; my energy is high, and I need family, friends and colleagues around me. He knows how to be quiet and have Enda time, which is something I should learn, too.

After writing for the Dublin Youth Theatre, Walsh made his breakthrough with his third play, ‘Disco Pigs’. The award-winning playwright and theatre director has since written 17 stage plays and several screenplays, including Steve McQueen’s acclaimed film ‘Hunger’. He lives in north London with his wife and daughter

People talk a lot about Cillian’s extraordinary eyes, but to be honest I didn’t notice when we first met – for me, it was his sheer physicality; he had a presence, an extraordinary energy.

That first meeting was in 1996. There was an exciting energy about Cork and everyone was trying stuff out – though I was about to fold my [theatre] company as I didn’t know what I was doing. Although I did have this script that I’d written [for Disco Pigs], and I knew that we wanted to get two young actors to play the two main characters.

I thought the play might be shite, but I auditioned Cillian, we read a couple of scenes, and I thought, “Wow, this guy’s making it feel real, not a theatrical exercise.”

We went from being effectively on the dole to performing at festivals around the world. There was a lot of partying, and the play had people buzzing about it. It was the ground zero moment for all of us in the company.

I’m older than him, so it felt a bit like having a younger brother. We joked around a lot and would adopt these characters, pretending to be these ridiculous luvvies who had nothing but anger and bitterness; he’d say, “This five-star hotel is just not good enough for us,” and all that carry on.

He moved to London and in 2006, I followed to the same area – Queen’s Park – with my wife, and we started to see each other again. I was proud that he was making a name for himself in films, and I forgot what an animal he was on the stage until he came to me with the idea of adapting [my play] Misterman.

We had a hilarious time working with one another again on my new play, Ballyturk; we have a similar sense of humour, we’re obsessed with music, and it was great for us to do together. In the wrong hands my text can sound lyrical and flouncy, but he’s got a way of saying it that seems true, while he moves round stage with the shape of a Buster Keaton; he loves the rhyme of a physical gag. Anyone who knows him thinks he’s hilarious, though he tells the worst jokes, using awful plays on words. When he was in [2003 film] Girl with a Pearl Earring, he spent a whole day texting me puns on the title; he’s a bit of nerd in that way.

We had quite a moment between us a few years ago when Cillian’s son Malachy and my daughter Ada were both together in the living room of our child-minder, a woman from Donegal, and we were all sitting down on a couch together. It was beautiful; all those years since we first met and we’ve remained friends – and now we’re looking out for one another’s kids, too.

Written by Adam Jacques in The Independent 21.09.14