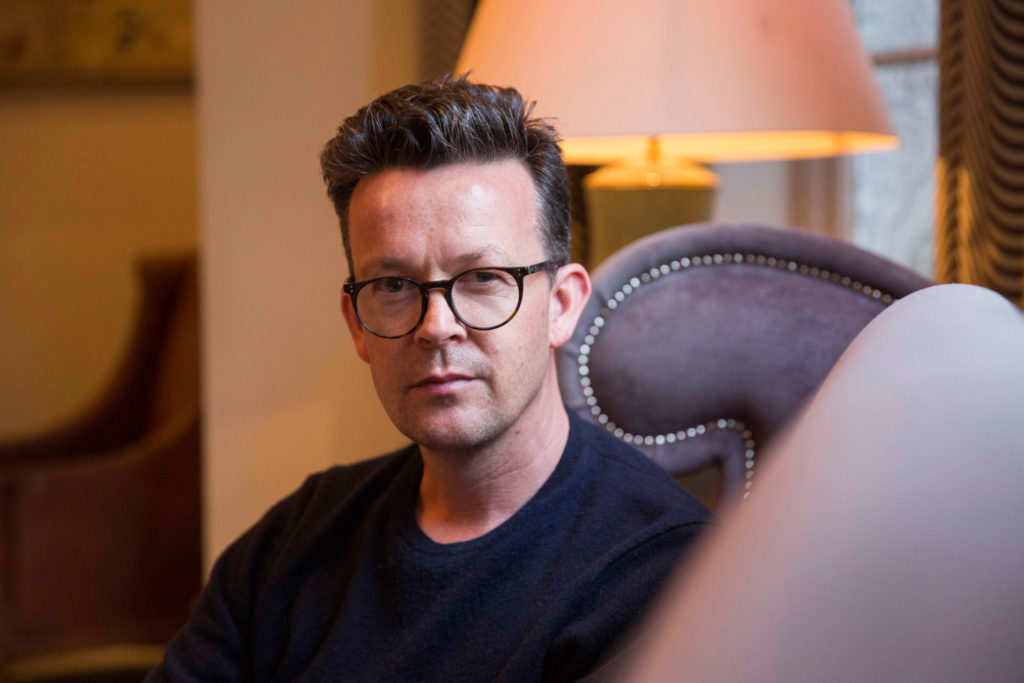 He considers himself ‘a profoundly Irish writer’ but this month marks Enda Walsh’s Abbey main stage debut. Andrew Lynch talks to the playwright about this career milestone, losing David Bowie and why he’s not interested in simple, linear narratives.

Enda Walsh has chosen to do this interview while walking his cockapoo Alvin in a London park. As a result, the tape of our conversation is regularly punctuated by his cries of mingled despair and affection: “No, we’re going this way,”, “Please, don’t eat that,” and “Alvin, get out of the pool!” It’s a little distracting, the acclaimed Dublin-born playwright admits, but having a domestic routine is extremely important to him – especially since “I spend about 80pc of the time living inside my head”.

For the next few weeks, sadly, Alvin is going to see a lot less of his master. This month Walsh’s work will be staged at Ireland’s national theatre for the very first time, with an Abbey production of his dystopian drama Arlington to be followed in March by its companion piece Ballyturk. As if that was not enough, February 13 will also see the premiere of his latest play – a site-specific piece called The Same staged at the old Cork Prison and produced by the Corcadorca company where he first made his name.

Ironically, Walsh had once intended 2017 to be a quiet year. He lost his mother, one of his closest friends and his most famous collaborator, David Bowie, in the space of a few months, while recent political events left him feeling that the world is “a complicated and scary place”.

“But instead of sitting back I just kept working, trying to eke out some hope and love,” he muses. “It’s been like having a conversation with myself during a really depressing time.”

Being in the Abbey, he cautiously allows, is an important milestone in his career.

“I’m such a cold fish that I rarely think about these things beforehand, but I probably will when I sit down on opening night. I do consider myself a profoundly Irish writer, like a mixed soup of Tom Murphy, Samuel Beckett, Sean O’Casey and lots of others – although I don’t feel a weight on my shoulders like some people in Britain seem to expect.”

When Walsh was writing his breakthrough play Disco Pigs in the mid-1990s, however, he could not have cared less about Ireland’s theatrical establishment.

“The Abbey seemed staid, conservative, irrelevant,” he recalls. “I still don’t think they’ve produced many great writers or directors over the last 20 years. In Corcadorca there was no need to ‘stick it to the man’ because for us ‘the man’ didn’t exist.”

For this reason, Walsh is particularly excited about being asked to write a new play for Corcadorca’s 25th anniversary. The Same has reunited him with director Pat Kiernan and actress Eileen Walsh, who co-starred in the original Disco Pigs with a then unknown local musician called Cillian Murphy.

“It feels familiar but also incredibly exciting to be in the same room again,” Walsh enthuses.

“Using Cork Prison helps to make the play part of a much larger thing, just like we used to put on shows in nightclubs and all sorts of weird venues. And Cork is a place I’ve always loved – it’s laid out like a natural amphitheatre.”

Walsh is a candid, good-humoured and exceptionally profane interviewee (most of these quotes have expletives deleted). He famously hates being asked what his surreal and dreamlike plays are about, often giving journalists the glib response, “It’s about 80 minutes.

Thankfully, he is willing to supply at least a few more details about The Same, describing it as the story of a woman who arrives in a new city and meets an older version of herself.

“There are two interlocking monologues that eventually become a dialogue,” he explains. “What advice can they give each other and how do they learn to embrace all the failures of their past?”

As this oblique summary suggests, Walsh has no interest in giving his audiences simple linear narratives or neat moral messages. “I used to write plays where you could walk away at the end thinking, ‘Yeah, got it.’ Not any more. Now I want to do more atmospheric work that has a loose shape and allows you to bring your own interpretations. It should bypass the intellect and go straight into your bones.”

Like many people Walsh finds the news “pretty bloody miserable” these days, which helps to explain why his recent dramas all have an overwhelming sense of dread.

Arlington, which was premiered by Landmark Productions at last year’s Galway International Arts Festival, is a futuristic love story with echoes of George Orwell’s Nineteen Eighty-Four and partly influenced by the Brexit campaign (“It showed that Britain has a real inferiority complex.”)

“I’m never going to comment directly on something like Donald Trump or the Syrian refugee crisis,” he says, “but you can’t avoid being affected by the sense of crisis and terror around us.”

Walsh’s apocalyptic vision may be why David Bowie seems to have seen him as a kindred spirit.

“When I asked him if we could write something like one of his songs, he laughed and said, ‘You’ve been doing that for years, Enda!’ David had absolutely no ego, he just loved making stuff and was constantly Skyping me to discuss new ideas.”

Bowie and Walsh spent 18 months co-creating the musical Lazarus, which opened on Broadway in December 2015 – only a few weeks before the pop icon died of liver cancer.

“Although I knew he was very sick, there was no sense that death was imminent until I saw him on opening night in New York. Then it hit me.

“I really miss him, but I’m so glad that Lazarus turned out the way we wanted – not warm and all-embracing like most musicals but cold like a feverish sort of dream.”

Not surprisingly, sharing a byline with David Bowie has left Walsh more in demand than ever.

“But I don’t have a commercial bone in my body and I constantly fire myself from jobs,” he protests, adding that with his 50th birthday approaching, he is already starting to think about retirement.

“As much as I adore writing, switching off this brain and living quietly in Ireland again sounds like a nice potential future.”

Then he calls Alvin to heel one last time and concludes, “Maybe in two dogs’ time!”

Written by Andrew Lynch for The Independent 05.02.17