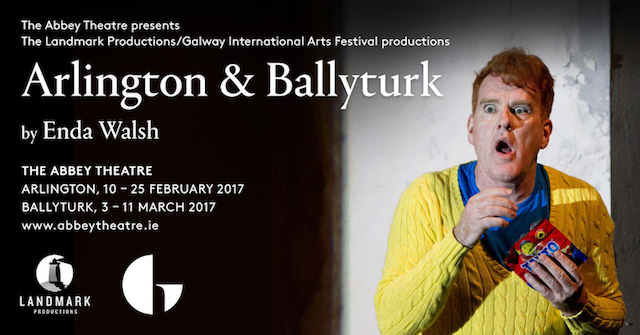 Landmark Productions and Galway International Arts Festival are delighted to announce that Ballyturk, written and directed by Enda Walsh, will play at the Abbey Theatre, Dublin, as part of the inaugural season by the new Directors of the Abbey, Graham McLaren and Neil Murray.

This new production of Ballyturk is a Landmark Productions and Galway International Arts Festival co-production in association with the Abbey Theatre, and stars Olwen Fouéré, Mikel Murfi and Tadhg Murphy.

Ballyturk premiered at GIAF to huge acclaim in 2014 and became the fastest selling show in the Festival’s history. Ballyturk made its UK premiere at the National Theatre of Great Britain in London where it was included in The Guardian’s Top 10 Theatre Shows of the Year. The show received multiple award nominations, and was awarded both Best Sound Design and Best Production at the Irish Times Theatre Awards in 2015.