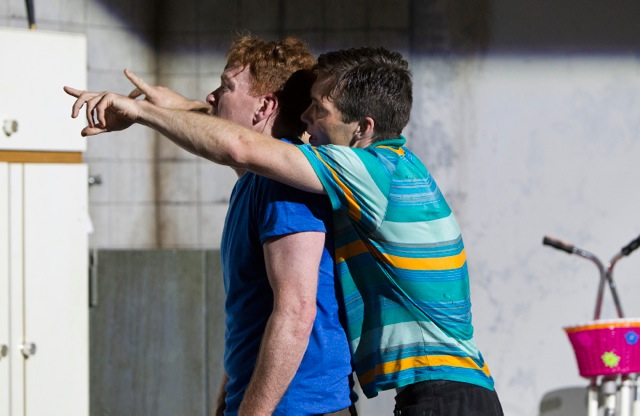 Some playwrights’ work is so tantalizingly open-ended as to resist either a single, or simple, assessment or point of view. Beckett of course comes to mind. So now does another Irish dramatist, Enda Walsh, whose “Ballyturk,” at the National Theater through Oct. 11 following its world premiere in Galway in July, is likely to invite as many interpretations as there are people who’ve seen it. Opinions may vary sharply as regards even the basics of what takes place, but one thing’s for sure: you won’t quickly forget the experience.

The curtain rises on two men, known solely as 1 (Cillian Murphy) and 2 (Mikel Murfi), who jointly inhabit a high-walled room complete with multiple cupboards, a cuckoo clock, but not a single window — no chance, therefore, of escape. Bound together like some modern-day version of Beckett’s tramps from “Waiting For Godot,” the duo at various points strip down to their underwear, dance and wreak verbal and visual havoc.

Midway through the 90 minutes, the back wall falls away and we are introduced to a somber-suited character called — what else? — 3 (an elegantly laconic Stephen Rea). Some sort of arbiter of doom, this person smokes (“terrible habit,” he remarks), croons the Frank Sinatra standard “Time After Time,” and proffers a deal whereby either 1 or 2 might join him in whatever world lies beyond the hermetically sealed space that 1 and 2 call home. Is 3’s offer an actual release or, rather, a summons unto the grave? Mr. Walsh isn’t saying, having told an interviewer prior to the London opening that “we won’t even begin to make sense — we’re going to leave you to unlock it.”

That this theatrical cryptogram is engaging rather than exasperating owes much to Mr. Walsh’s high-octane production. (The Tony-winning author of the stage adaptation of the film musical “Once” here doubles as his own director.) The two defining performances of Mr. Murphy and Mr. Murfi all but reduce the sound-alike duo to a sweaty wreck by the end, and the men’s teamwork recalls the kind of acting as theatrical combat associated with the heyday of Chicago’s Steppenwolf Theater, a company for whom physicality has always been key. That’s not to minimize writing that mixes deliberate gabble with allusions aplenty — the late-arriving young boy from “Godot” finds a direct equivalent here. But Mr. Walsh acknowledges Beckett only to put him to the side; after all, no one dramatist owns the patent when it comes to meditations on mortality.

The title, incidentally, refers to the fictional village whose citizenry 1 and 2 channel during their banter (we also hear, via tape, the voices of various townspeople), and Irish theater buffs will note the affinity between Ballyturk and the dramatist Brian Friel’s much-loved and comparably invented town of Ballybeg. Mr. Walsh’s words in this case are there to feed the adrenalin rush of the event as a whole: you don’t so much see “Ballyturk” as you do surrender to it.

Written by Matt Wolf for the International New York Times on 25.09.14